Using Your Windlass the Right Way

After 28 years with Muir, Craig McNaughton knows a windlass when he sees one. Here, he gives us his best tips for protecting the lifespan of the windlass; something which he says comes down to using it as a retrieval and deployment device only, not a bollard.

“By throwing a mooring line over the capstan, you are transferring the snatch load produced when the vessel moves with the swell or waves, onto the main windlass shaft,” says Craig.

The same applies for using the windlass to tow a vessel, only here there is larger shock-load and strain due to the mass of the vessel being pu0lled through the water with swell or chop. If the windlass is loaded incorrectly in this way, there’s the potential for it to be torn out of the deck.

“It is better to tie off on bollards or deck cleats that have been mounted on ‘strong points’ (with heavy-duty mounting and strengthening) by the boat designer and builder,” says Craig.

You can also protect your windlass while bringing up the anchor rode, by motoring (or sailing) slowly forward towards the anchor point. Once you’re directly over the anchor, the direct upward pull of the chain will lift the stock of the anchor and allow it to breakout of the seabed where it is then easily raised directly up to the vessel. This takes the load off the windlass and will extend its working life.

“The same applies with anchoring. We recommend the load is taken off the windlass at anchor by the use of a snubber line or strop from the anchor rode, back to a cleat or bollard. You can also employ the use of a chain stopper mounted on a reinforced point, to take strain loads off the windlass,” says Craig.

Muir winches are designed with a maximum load well in excess of the weight of the anchor and chain, but you should always check the safe working load of the equipment. For more advice on getting the best out of your anchoring equipment, contact the Muir team.

This article first appeared on Australian Wooden Boat Festival; a Tasmanian event which Muir is proud to sponsor.

Off and running, Sanctuary Cove International Boat Show 23-26 May

MUIR - HERE FOR THE LONG HAUL

Muir gets behind Australian circumnavigation for Parkinson’s

Using Your Windlass the Right Way 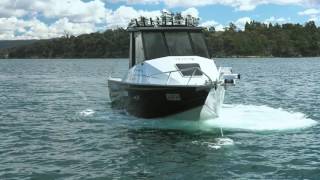